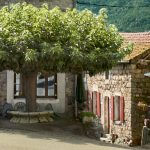 A little history: the municipality of Sablières saw its population decrease considerably in the 19th and 20th century. Indeed, in the 1800s, the number of inhabitants was around 1,880 people; then 376 in 1946 and 300 in 1948. Remoteness of towns where peasants could sell their harvest and other productions was a real problem. Men had to walk long distances (about twenty kilometers) on particularly steep paths, carrying heavy loads on their back. The road from Sablières to Joyeuse was not realized until late, many inhabitants left in town or abroad (Canada, North Africa), leaving almost entirely abandoned a territory that was totally cultivated.