The church is composed of an old part, Romanesque, with a bell tower of the XIIth century, classified historical monument. 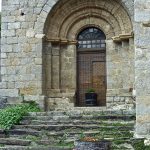 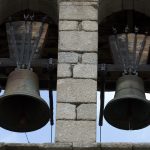 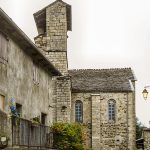 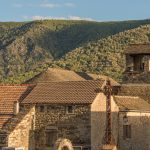 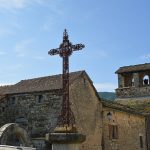 It was built by the Sarrazins who became slaves (see the Sarrazins in Provence, departmental archives of Marseille). They invaded Gaul in 731-733 AD, came to Viviers where they killed the bishop, then were defeated at the Champ du Roy in 737 by Charles Martel, and repulsed. Jean Régne mentions in “L’histoire du Vivarais”, three concentration camps in the region. The place is called Sablonarias in 954 (cartulary of St Chaffre), Sablériis in 1275 (Decades), Sablières in 1469 (Estime).

The church belonged to the Abbey of St Chaffre and was dedicated to Our Lady of the Rosary.

– The church of N.D. de Sablières (Sableriis) was visited in 1501, before the damage of the Reformation. There were 5 bells, an altar-major, consecrated, 3 others altars dedicated to St. Anthony, St. James, St. Sebastian, also consecrated and the 4th, non-consecrated, dedicated to St Blaise.

The new church was built in 1872 to enlarge the old one. The commune counted more than 1500 inhabitants.

Since 1 January 2003, the church of Sablières is part of the parish Ste Thérèse of the Cévennes which owes its name to Sainte Therese Couderc.

One can see in the church, on the left, an altarpiece of the Assumption in painted wood with two fluted columns adorned with vines framing a painting of the Assumption; it is adorned with sculpture (heads of angels, figure of God the Father with the entablature, frieze …). Dimensions: height: 6 meters, width 4 meters. The report of the visit of 1674 already indicates the presence of this altarpiece. 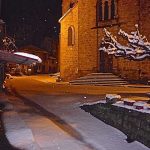 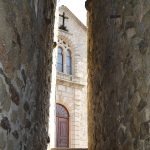 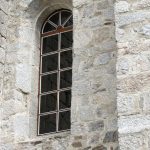 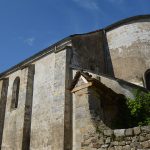 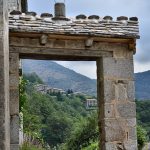 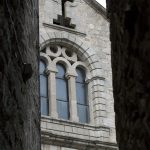 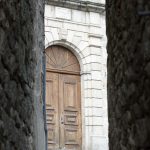 This chapel was built after the pastoral tour of Saint Regis (1597-1640) in the parishes of the Drobie’s valley between June the 20th and 16 July the 16th 1634. It rises on the place where Saint Regis distributed the sacrament of baptism and planted a chestnut cross.

Patron saint of the France’s province’s Jesuit, he traveled extensively through the mountains of the Cevennes, Vivarais and Velay to bring the word of God but also to support the poor. Its name is related to a small town of Ardeche, Lalouvesc, where he ended his life, and which became a place of pilgrimage. 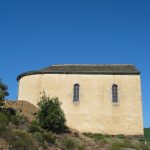 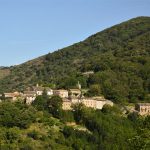 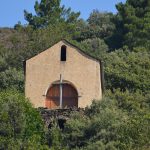 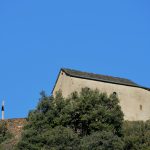 Black Virgin Our Lady of Sablières

There are about 200 black virgins in France, fascinating and intriguing. They are symbols of fertility and fertility of the land.

According to D.Dupraz, curator of the antiquities and objets d’art of the department of Ardèche, this black virgin presents many details that make it an exceptional object. 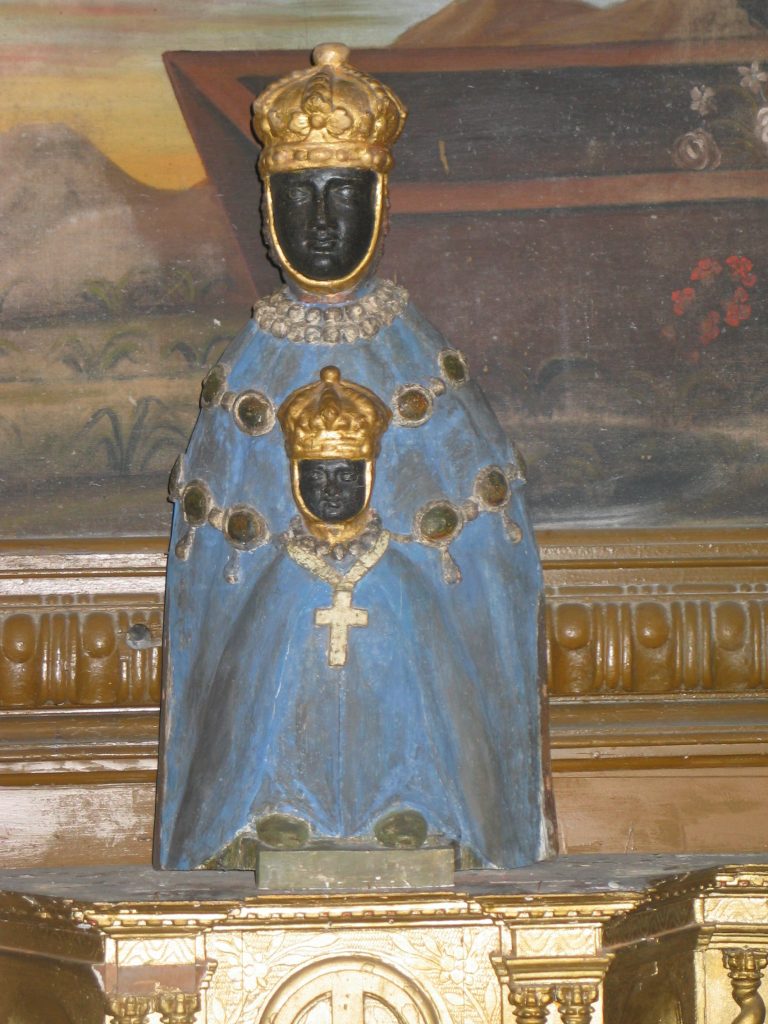 “It is a sculpture in gilt and polychrome wood. Its coat is of a single color, a beautiful uniform blue. The Virgin’s necklaces consist of two rows of round pearls around her neck and two rows of necklaces with oblong cabochons around her shoulders and chest. These elements, as well as the crowns, are golden. Only the oblong cabochons, which presumably evoke precious stones, are black or dark brown.

The neck of the Child is surrounded by a single necklace of round pearls and a cross supported by a broad flat ribbon, the whole being golden.

The feet of the Virgin appear under the rim of the cloak: they are placed on a small square base square with the statue. At the back you can see the start of a low seat.

An exceptional detail deserves to be noted: on the front of the statue, at the level of the body of the Child, are distinguished cracks and traces of ankles. Jean de La Laurencie suggests that it may be a reliquary that no one has yet dared to force.

This statue seems not to have always been there, in fact “a tradition, making it contemporary with the belfry of the old church, which is of the eleventh century, considers it as an import of the Crusades under the protection of the Lords of Serrecourte , or as an inheritance of the monks of Saint-Chaffre or the Abbaye des Chambons “.

Confirmation of this tradition could be found in the fact that the vogue of August 15, which is known to be the Marian feast par excellence, has long been held at the Abbaye des Chambons, a Cistercian abbey devoted to Our Lady and founded in 1153, ruined as early as 1615, to which the Revolution in 1791 gave the coup de grace. Our Lady of Sablières looks too much like her sisters to date, as tradition would have it, of the eleventh century.

Although we do not have here, as at Nieigles, the tradition of a Holy Belt, Our Lady of Sablières was nevertheless invoked during difficult deliveries. “Excerpted from” Les Vierges noires Vivaroises “, Les cahiers de Cévennes, Land of Light, 1988, N ° 3, written by Roland COMTE ethnologist, born in Aubenas in 1948.

Sainte Thérèse Couderc was born in Sablières on February 1805 the 1st. In 1827, at the request of Father Etienne Terme, she went to Lalouvesc to hold the house in which is the tomb of Saint Francis Régis, where many pilgrims come. She then founds ‘the Sisters of the Cenacle’ and offers retreats or times of prayer and deepening of faith for women who wish. She died on September 1885 the 26th in Lyon and her body was brought back to Lalouvesc. Thérèse Couderc was beatified on November 1951 the 4th in Rome by Pope Pius XII and was canonized (registered with the number of saints) on May 1970 the 10th in Rome by Pope Paul VI.

The Sisters of the Cenacle regularly organize spiritual retreats in the home of Sainte Thérèse Couderc. 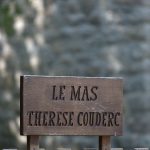 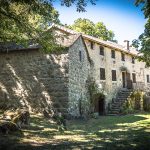 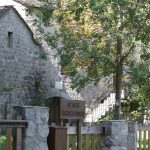 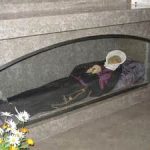 This bridge enabled the inhabitants of the communes of Sablières and Dompnac to go to the markets to sell their crops or to go to the communes of the south, particularly those of Joyeuse and Saint Genest de Beauzon, places of important fairs. The inhabitants of Beaumont, Saint Mélany and those of the hamlets of Dompnac (Pourcharesse, Nouzaret, Champ Blanc), located on the same side of the river Sueille that Saint Mélany, crossed the Drobie at the level of the bridge of the Brousse. The roads joined in the ascent to reach the ridge at the Croix-de-Fer, where there was an “abitarelle”, a mule-tied inn. This road was for a long time the only way for the inhabitants to trade, the road leading from Joyeuse to Sablières having been made only very late. (See documents on the history of Sablières). 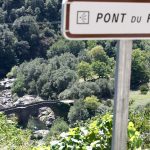 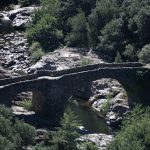 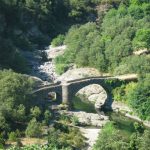 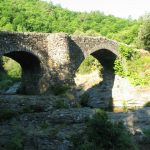 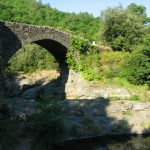 It’s a Huguenot house with some parts dating from the 15th century. In 1464, the property belonged to Louis de Borne, Lord of Ligonès, lieutenant bailli of the Viscount de Joyeuse. The “castle” will be severely damaged at the beginning of the 16th century, following the wars of religion. By the Treaty of La Borie, in 1576, Pierre de Borne was authorized to rebuild it. But in the middle of the 17th century, the family of Borne de Ligonès was almost ruined by the war and its property put into judicial liquidation. 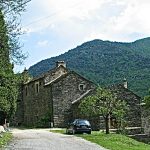 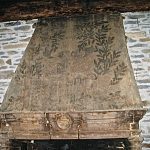 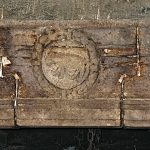 Old documents can be downloaded on the french part of the website.